For those who will be coming out to Chicago this upcoming weekend for the Chicago Comics and Entertainment Expo [also known as C2E2], I will be in artist alley at table I-3.  I will be there all weekend except for a signing with Archaia for the Legends of the Guard trade [which I still don't know when that will be] and the occasional bathroom break.  This year I will have tons of trades of CPG vol. 1 as well as buttons, prints, a special guest appearance by a small spikey potato, maybe portfolios, and I want to display the Kickstarter print.  We will see how that goes though, no promises.  I am working on a new print that is taken from said Kickstarter print and will be a little bit smaller than the stained prints.  I am planning on coloring it, so it will be a lot different than the other prints available.  Here is the black and white version though... 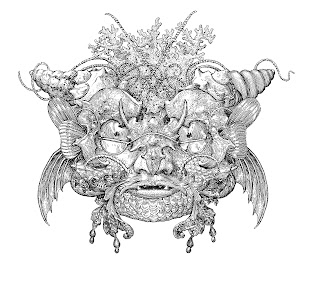 The original is from the border of the Kickstarter print, and measures 3 1/8 inches from coral crown to the end of his sea weedy mustache and 3 1/4 inches from sea shell to sea shell.  I will post the colored version later tonight after I finish it.

I will also be opening a commission list for con sketches, there will be 4 spots a day and they are just a measly $75.  So come early, if you can.

Hope to see you there!
Posted by JeremyBastian at 7:55 AM