My long overdue post about my time in France -part one-


So I know it's been a pretty long time since I came back from this trip but I just get overwhelmed with the idea of having to do things.  That and it's so much easier to just sit at my table and draw.

Well it started like this-  Guillaume Trouillard, the man in charge at Les Editions de la Cerise who publishes the French edition of CPG (known in France as La Fille Maudite du Capitaine Pirate) asked me if I would like to come to France for a couple of months.  I was stunned by the opportunity and didn't really believe it would happen.  Guillaume knew of a residency program and thought I had a good chance of getting in.  It turned out he was right.  I was offered a 10 week residency where I'd be staying in a small house in a city called Bassens, just outside of Bordeaux, I'd even have a car at my disposal.  It was through Chateau Brignon a group of educators using the comic arts to reach out to kids.  La Fille Maudite was coming out at pretty much the same time so Guillaume had also arranged for a bunch of signings in different cities and at a couple of festivals.  It was an amazing trip,  I made a bunch of lifelong friends there and I am constantly daydreaming on returning. 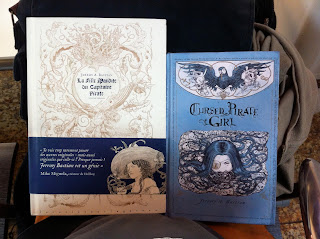 Here is what the two editions look like next to each other.  Cerise did a fantastic job!  Guillaume, Vincent and Laura came to pick me up from the airport in Bordeaux.  Vincent Perriot (a very notable artist in his own right and a good friend to Guillaume) had the car and Laura (the person I came to rely upon the most and whom I am very happy to call a true friend and who is an editor at La Cerise) spoke English fluently.  The picture just below is of Guillaume and Vincent on my first day in Bordeaux 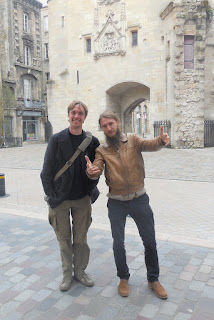 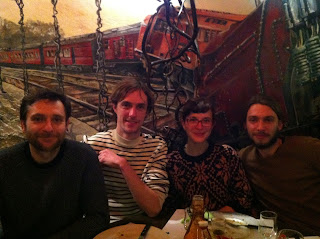 This picture (although from my second trip to France, at the end of the Angouleme festival this year) shows from left to right- Julien (another member of La Cerise), Guillaume, Laura and Vincent.  It's one of the rare times Laura let herself be photographed :) Here are 4/5ths of who I truly call my French family. The only person missing from this picture is Romain, wine and whiskey expert, my movie buddy and Laura's (more than just a-) boyfriend.

I do not speak French, Emily and I are currently taking a French class at Schoolcraft College.  I had no problems interacting with people over there though.  For the most part everyone I came across spoke enough English that we could understand each other.  If not through words then gestures and actions.  I found everyone I came across extremely joyful and welcoming.

Anyway, Guillaume, Vincent and Laura drove me to my little house in Bassens and then took me to the Cerise Studio in Bordeaux. 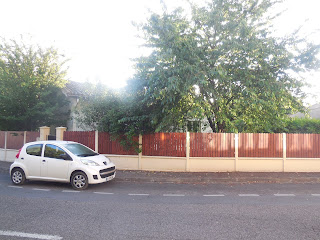 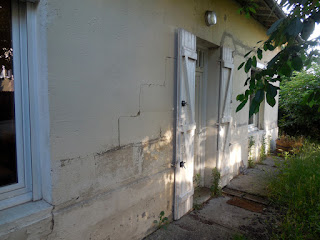 These are pictures of where I stayed. That is my little white Renault that took me to the Super U to get groceries every week.  In the front yard there is a cherry tree that fruited while I stayed there.  I could walk out and pick cherries, at least until I discovered that the flies were also very familiar with my cherry tree and would lay eggs in the cherries :( 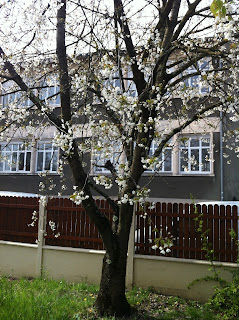 Here it is on my first day, still in bloom.  When I first arrived I had to share the house with the comic creator who had the residency just before mine for the weekend.  His name is Pierre Druilhe and although he said he didn't speak English well we still had a great time together.  Pierre is a great guy and a great comic creator. 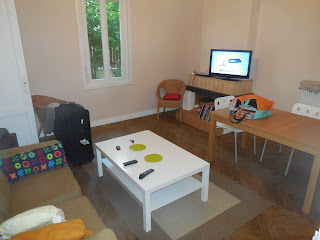 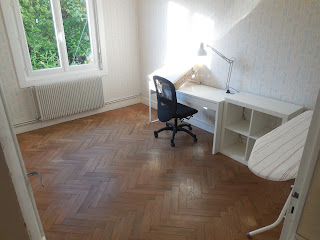 Here are a couple of shots of the inside.  The living room where I watched a bunch of French reality tv and my little studio.  Most of the day I'd leave that window wide open.  There were a couple of times a cat would jump in and poke around a bit.  I gave him a spoonful of Biscoff cookie butter but I don't think he liked it very much, I set it outside and it took a couple of days before it vanished.

That first weekend was also the comic book festival in Carbon Blanc -Bulles en Hauts de Garonne- Pierre was signing there and Cerise had a table and advance copies of La Fille Maudite for me to sign.  After that weekend Pierre left and I had the place to myself.  The next weekend was the book festival in Bordeaux and Cerise had a table there too.  Escale Livre Bordeaux, this festival was much larger, it consisted of several different tents to accommodate different kinds of books.  There was a tent for BD (graphic novels), one for kids books and another for art, fiction, non-fiction.  The weekend after that there was a large BD festival in Aix en Provence and I was an invited guest. 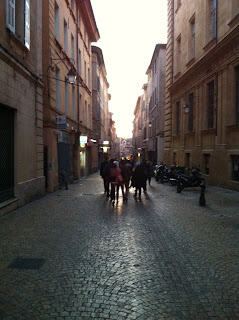 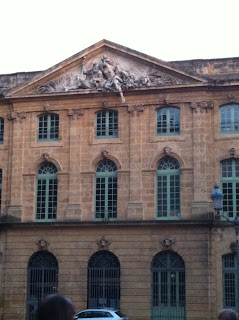 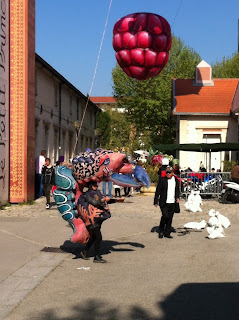 The first photo up there is of a bunch of the artists/creators at the festival walking to dinner at the end of the first day.  Well this could've been of us walking to one of the gallery openings featuring one of the guests of the festival.  Art, appetizers and wine!  Then it was off to a very elaborate dinner.  Luckily I was able to tag along with a couple of fluent English speakers the whole weekend.  The second was one of the remarkable architectural elements I saw that weekend.  And the third was a shot of one of the very strange crustacean costumes that wandered around the festival streets.  I had a severe culture shock when it came to lunch at the show.  For many guests at shows here in the states it is a struggle to get a bite in during a show.  Many of us just try to cram things in in between signing and gabbing during a show.  During the shows in France however there would be a time when all the artists would just get up from their tables and go to lunch.  It was fantastic!  A wonderful catered buffet lunch for all the guests, including different types of dessert.  And of course wine :) After lunch you could go back to your table and sign more books, but only if you wanted to.  You could sign in at the beginning of the day and tell the show staff what hours you wanted to sign for.  They would mark it on a giant board to let people know when you'd be available.  I was not used to this so I just agreed to sign all day every day.  With an hour off for lunch of course.  The show staff was very supportive and really made me feel welcome.  I met artists from Korea, Spain and Germany as well as French artists.  I even gave in and danced the night away at the big party on Sat night.  Yep, danced until I had decided I was too sweaty and embarrassing to continue dancing.

That was the first 3 weeks, so I really didn't get much accomplished on the art end.  Except for the dozens of little dedicace drawings I did in peoples books.  One of the French phrases I became very familiar with was "c'est pour qui?" meaning "to whom is this for?"  I'd say 99.998% of people wanted personal dedications in their books.

Stay tuned for part two- Toulouse, Paris, Rouen and a step by step of the first page I finished in my little studio.