So I'm again overdue, my apologies.  I was waiting to obtain scans of the finished product, my scanner is not that big and it's not the best for trying to get detail.  Tom has a good friend in Transmission Atelier who has an amazing scanner and it is from him I will be able to post images that will give you a decent look at what I have been up to.  He is still working on it.  I do have some of the surviving sketches I did in the creation process. So here they are- 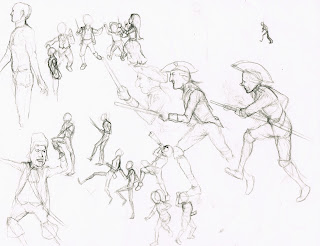 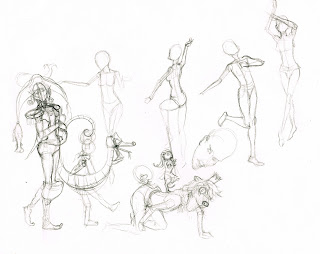 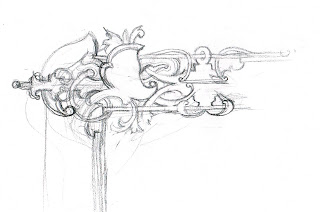 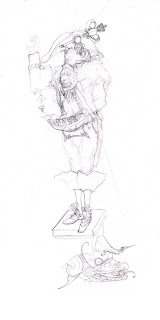 What I could not find was the original sketch of the figure that makes up the left side of the border.  Which just happens to be one of the coolest things I've come up with thus far.  I really like him.  The figure above represents the "military might" the opposing force on the black waters of the Omertas.  At least after the first story arc of Cursed Pirate Girl.  The other figure represents the "Piratical will" on the Omertas.  The royal soldier above is capped with a giant key, I wanted that to suggest he is more of a wind up toy than he is a free willed character.

Hopefully I can get those scans soon and I will be able to show you some more.
Posted by JeremyBastian at 8:53 AM