Tomorrow Emily and I leave for "the big show", San Diego Comic Con or SDCC for those who like to save time by saying or typing the full name.  I will be set up at the Century Guild booth not artist alley.  We will be located in the 2800 aisle at the back.  We're usually across from Pokemon and kiddie corner from Image.  Hey! I found a map!  So here's exactly how to find me.  go in through C [or D] and follow the orange path.  Look for big elaborate Paintings with impressive wooden frames and a glass case with antique art nouveau vases.  I will also tweet a pic of what it looks like when we're done setting up.  If you don't know, my twitter account is just @JeremyBastian . 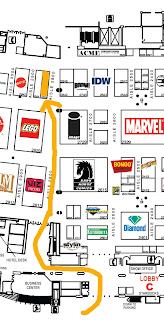 I was hoping this would be the best show yet, but now I'm just hoping it won't be the worst one yet.  I have not heard any news about the Archaia hard cover version of Cursed Pirate Girl other than it will not be available at the show.  I don't know when it will be coming out.  Hopefully I will have copies for sale at the next convention I am attending.  So there's that.  I am going to be on a panel though, so that's good. Archaia Presents: How to Tell a Better Story Through World-Building, Sat from 6:00pm-7:00pm in room 9.  I will be joined by David Petersen [you might know that guy] and Royden Lepp of the Archaia title Rust fame.  Dave and I did a similar panel at C2E2 and I thought it went quite well.  Hope you come and check it out.  You can also see more of Dave and I talking about this subject here, we did a little web panel thing for people who might be interested in world building.    So watch that and then come and ask questions... or not.  And if you do watch it and come to the panel, ask Dave about his girly hair he had back then.  Hah!

One of the items I will be bringing with me to the show is a new [!] print.  I have been taking a large number of prints from show to show and it just seems a bit boring to have the same stuff available at every show.  I do this because I usually don't have time to work on pieces outside of the book.  This year I made some time.  I had about two weeks in between the Heroes Con in Charlotte and the San Diego show so I thought that would be the perfect amount of time to do up something new for people.  I also decided that instead of adding one more piece I'd have to haul from show to show year after year, I would make it a limited print.  I will still be stained with tea, the same way all my prints are, but I am only making 100 of them.  So being that they will run out at some time, I am asking $30 instead of the regular $20 for the other stained prints.  Here it is if you'd like a closer look before the show. 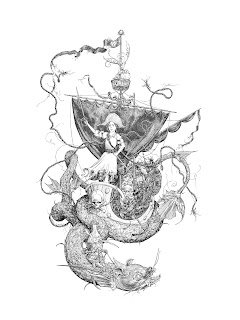 Century Guild will be bringing a Cursed Pirate Girl t-shirt for sale.  I'm really excited about this.  They turned out great. 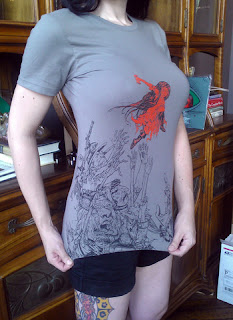 They will also have a couple of Gail Potocki t-shirts as well, and I can't wait to see those in person.  Here is a link to the shirts they've made, I don't know if all of them will be available at the show.  So we're leaving tomorrow morning and I'm really looking forward to the show!  Hope some of you are able to come and then be able to find me!

I would like to take a sec to thank everyone who decides to put up the money for con sketches.  I know I have a couple of people waiting for sketches and I promise I will get to them.  Thank you for your patience.

Posted by JeremyBastian at 8:09 AM 4 comments: