Yesterday at the Antiquarian Book Fair

So by chance I remembered that there was an antiquarian book fair taking place yesterday at the Union at U of M.  I dragged my sister to it and proceeded to spend a little past what I was allowing myself to spend.  But can you really blame me [that's rhetorical].  I picked up a couple of books illustrating Napoleonic soldiers along with a couple of illustrated story books.  Of these last two, one jumps out and has indeed made itself my new obsession.  As far as illustrators go.  The book is The Brave Little Tailor and is illustrated by Olga Dugina and Andrej Dugin.  This duo has worked on only 3 other books, The Fine Round Cake, Dragon Feathers, and Madonna's the Adventures of Abdi.  There is also a large selection of illustrations from an Arabian Nights collaboration that I don't believe has come out yet, on their website.  Here are a couple of images from the Brave Little Tailor. 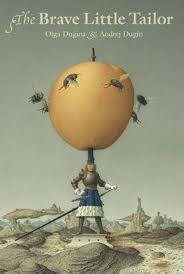 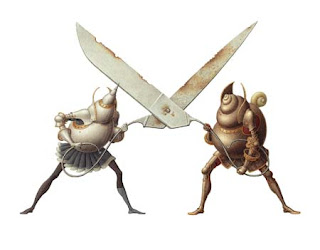 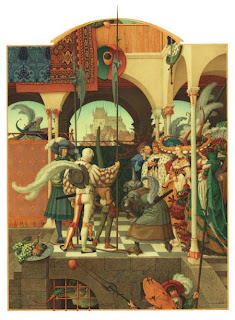 Inside the book it says that it took the duo six and a half years to complete the paintings that make up the book.  It's nice to hear it takes others a great deal of time to complete things as well.  This book has a lot of images that make me Extremely jealous and now I have to track down all the other books they have worked on.  I just wanted to share my find with you and encourage you to find this book and marvel at it like I do.
Posted by JeremyBastian at 9:23 AM 3 comments:

So I finished the charity piece that will be up for auction at Heroes Con in a couple of weeks.  It's based off of a Hendrik Goltzius engraving from 1586 entitled Haratius Cocles, from a series he did of The Roman Heroes.

I'm really looking forward to this show.  Last year I had really low expectations due to it was the first time I was doing the show and the fact that I was all alone.  My fears were completely unfounded and I had one of the greatest conventions ever!  So don't let me down Charlotte... ;]  This year I will also be doing the show solo but at least I have an idea of what to expect.  Olympian is still working on the added incentive Kickstarter poster, so I don't know if I will have any of those available at the show or not.  You can at least bid on an original Cursed Pirate Girl piece and help make next years show even better.  I believe I'll even be on a panel this year.  So you should definitely come to that and watch me be real nervous, I bet if you look closely enough you'll see my heart trying to escape the cavity of my chest just like a baby Alien.

The rest of June will be spent working ferociously trying to make up for going to cons and then toward the end of the month the 25th and 26th Emily and I will be in Traverse City for C3 or Cherry Capital Con.  A couple of things that need to get done that weekend... First a trip to Horizon Books [to spend a bunch of money] and then we will need to find a theater so we can see the extended cut of LOTR Return of the King.  The 25th is also my birthday.  You should come just to say Happy Birthday.  You should also come because they're gonna have a bunch of great guests. Besides Traverse City is frickin gorgeous and tasty, what could you want more for a convention backdrop.  Hope to see you at either of these shows.

Posted by JeremyBastian at 7:50 AM 4 comments: