After those first three weeks I was able to really get some work going.  I would wake up at 7:00am have a little breakfast and sit down and start drawing.  I'd put an audiobook on and go until lunchtime, then about another hour of work until I had to lie down for an hour (sometimes even just 15 minutes was enough).  I made a makeshift nap nest in the studio using cushions from the couch and a spare pillow.  I'd get up ready to go and sit back down to work until dinner time (my dinner time was about 5pm, dinner time in France is usually at 8pm or later).  Watch an episode of Mr. Show on my ipod and then work until about midnight.  I had this schedule going all the days I wasn't heading into Bordeaux to hang out with Guillaume or Laura and Romain.  Here are the daily progress pics of the first page I finished in residency- 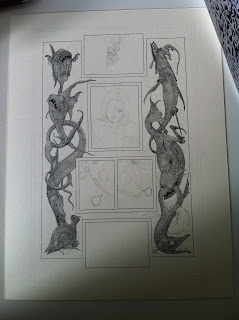 When I look back to this page I think my subconscious was being a little overly dramatic. One might think I felt a little isolated and surrounded by monsters.  I promise you that was just CPG.  Here you can see how I was able to get such depth with brush hatching. Just different passes over and over with different angled line work. I wanted to get the background tone done before I really went in and darkened the critters. So I knew how dark to make them.

The next stop on the La Fille Maudite book tour was Toulouse.  I had a talk at a library and then a book signing at a local comic shop Terres de Legende.  They did a great display in the window that I forgot to take a picture of.  They asked for any damaged copies of the book and then took out pages and strung them up.  I had one of the best meals of the entire residency after the signing.  They took me to a little restaurant kind of like a pub and I had foi gras for the first time.  It was THE BEST!  And they loaded me up with a bunch of free books!  The most unfortunate part of doing a post like this so far after the fact is I've forgotten a lot of the names of the people who helped me out so much :( I'm very sorry about that. There was a lovely lady who picked me up from the train station and was pretty much my chaperone the 2 days I was in Toulouse.  And the guy who ran Terre de Legende really reminded me of Curtis from Vault of Midnight.  A guy you really wanted to hang out with and have a beer.  I was able to roam about before my library talk and took a couple of pictures- 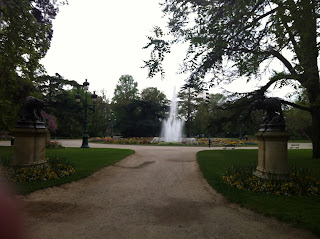 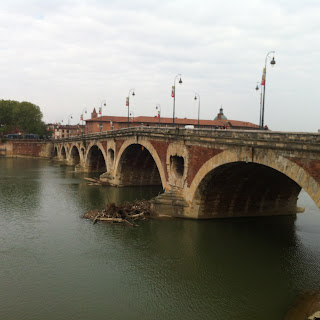 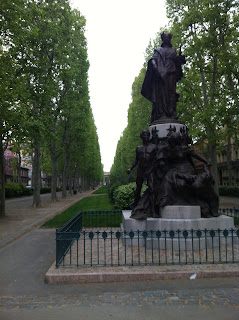 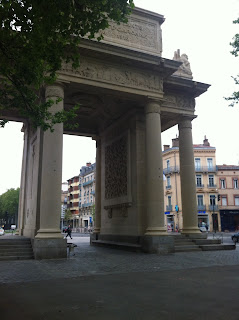 After the trip to Toulouse I was counting down the days until Emily arrived.  At this point I had been in France for about 7 weeks I think.  Emily was coming and she was staying with me for 2 whole weeks, I was really excited!  I couldn't wait to show her around.  I made a practice run to the airport in my car just to make sure I'd be able to get there on the day with no problems.  She landed in Paris and missed the flight to Bordeaux, which isn't that hard to do since there was less than an hour layover and Charles De Gaulle airport is frickin enormous. 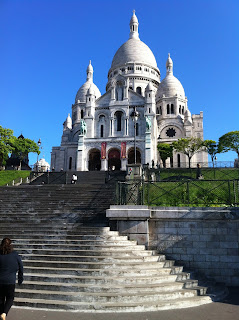 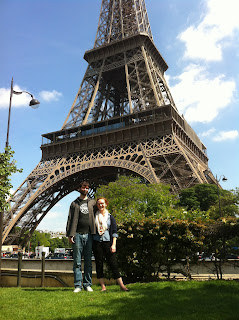 The next book store signing planned was in Paris.  Emily and I took the train to Paris where we met Laura and she helped us navigate the Paris underground and got us to where we needed to be the two days we had in Paris.  She was amazing, we really wanted to see a bunch of things and she didn't flinch.  She took us to see the Louvre (only from the outside, we didn't have time to go in), Notre Dame, the Eiffel Tower and Shakespeare and Co. (the bookstore they used in the Highlander series, hee hee hee).  Paris was the most confusing city we visited on our stay and we couldn't have done it without Laura.  Comic shop signings at Librairie Super Heros and the second day at BD Net.

Then we took a train from Paris to Rouen.  I had a book store signing at Au Grand Nulle Part. The owner met us at the train station and not only took us out to an amazing lunch at a wonderful restaurant but then took us on a short walking tour of his city.  Rouen was the one place Emily and I agreed we could move to.  It's a little like Ann Arbor meets Diagon Alley.  Here are a couple of pictures from there- 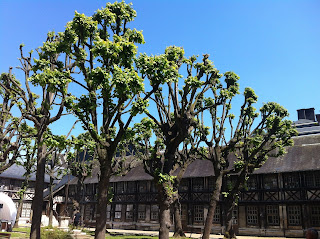 After the signing in Rouen we took the train back to Paris and then a train back to Bordeaux.  It took me awhile to learn the pathways of Bordeaux to the places I liked most.  Of those there was Mollat -the largest non chain bookstore in all of France, if I'm not mistaken.  The art supply shop, the Bio c' Bon -the organic super market, and the only place I could find peanut butter (it wasn't that great), and the movie theatre.  Before Emily showed up Romain and I went to a couple of movies.  Occasionally Laura had to go away for the weekend for her other editing job and Romain and I would meet for a beer and a movie.  Captain America Winter Soldier had just come out and I really wanted to see it.  They didn't dub it, they kept it in subtitles. Everything but when the bad guy on the ship in the beginning spoke French.  At that point everyone in the theatre chuckled, I thought he had said a joke, not that his expression said anything to that point.  Romain leaned over and explained- "that guy is Canadian".

Next -part 3 Angouleme, Pau and goodbye to Bordeaux.


Posted by JeremyBastian at 2:00 PM