Here are some shots of the previously mentioned left border figure.  These are from my phone so I know they are kinda fuzzy.  To show you a progression... 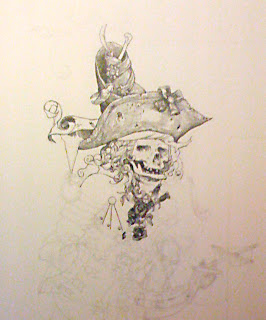 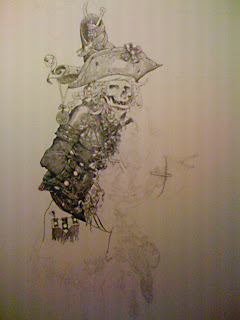 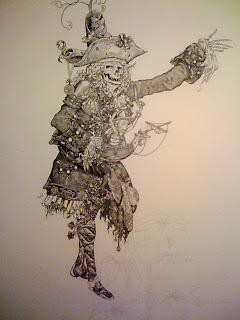 This was the first part completed.  So now you can see why I particularly liked this guy.  Some details you will not be able to see on these images include the nautical creatures on his cuffs and trim of his coat and the repeating fish pattern on his leather boots. Well you might be able to make out the latter a little bit.  I had fun doing that, it's the first time I've ever tried doing an Escheresque pattern.  And what Cursed Pirate Girl piece would be complete without a monkey.  Originally I wanted the two monkeys to be mermonkeys like in the comic and have their tales coming from out of the bottom of their ships.  That design just didn't make sense.

I have to say what really inspired this and it's opposing figure was the book Journey of the Imagination - the artwork of James Christensen, I was not familiar with Mr. Christensen until maybe a year ago.  I saw his book in Barnes and Noble and kept wanting to buy it but kept putting it off [I didn't have the $ and then when I did it was a destination too far out of the way... etc].  I'm glad I finally went out there and picked it up, it's really amazing.  Very wonderful and absurd, two qualities I hold in very high regard.  He also includes in many of his pieces floating fish.  Which is definitely something I wish I had come up with.  Anyway, you should gander at his site and search out his book, you won't regret it. Here's a couple of grabs off of the internet- He reminds me a lot of Alan Aldridge, whom I believe you'll remember me talking about in an earlier post.

Speaking of amazing illustrators and artists of the fantastical, I don't recall if I've mentioned Kinuko Craft, who also has an art book out now Drawings and Paintings.  She is also one of my contemporary favorites.  We've picked up a couple of her illustrated story books, King Midas and Cinderella.  She's just as magical and magnificent as Aldridge, Christensen, Rackham, Dulac, Crane, Nielsen, Tenniel, and Ford.  To name a few... heh.  I hope some of these names are new to you, because then you've got plenty of exploring to do.  Here's a Kinuko Craft though, enjoy- 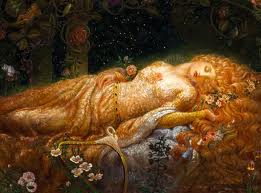 Posted by JeremyBastian at 7:36 AM