Well here it is!  Here is that piece you've all been waiting for... maybe.  So here is the full thing with a couple of details, I'm guessing it was around 3 months but it could've been a bit more.  Emily tells me I should get a chess clock so I can time myself more exactly. 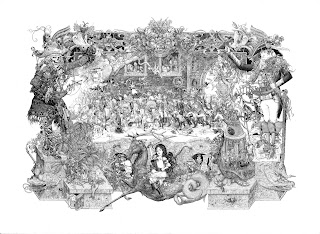 The whole story behind it is pretty much this- CPG has put on a pirate festival to be a distraction so that her pirate crew can sneak into a secret royal treasure trove held in the small island city of Cub.  As the royal marines are attacking though she disarms them with the music she is playing with her concertina, it frightens the evil from their minds and hearts.  Transforming them into innocent festival goers. 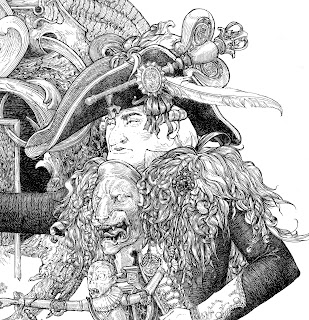 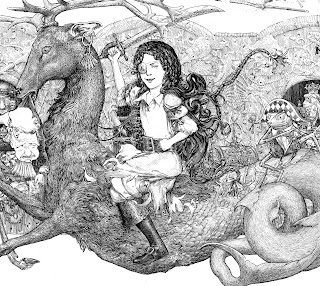 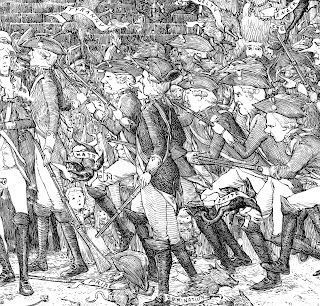 It's funny what are my favorite parts are, like the shading under the skeletons boot and the texture of the snails.  This was a very challenging thing for me to take on and I'm glad I did.  So far the only challenges I have set for myself were just to come up with strange characters and strain the limits of my imagination.  While this is a good thing, this was a different kind of challenge and I have already seen an improvement in the pages for vol. 2 of CPG.  I have definitely raised another bar on what I expect my work to look like.  In interviews and conversations I've always said that I do Cursed Pirate Girl for me.  And I am extremely lucky that I can afford to do it that way.  I'm also extremely lucky that there are people out there who appreciate what I create.  So thank you very very much for putting up with the slow progress of my little story and being open to something new/old.

I have mentioned before that this piece was created as an added incentive for those who were aware of and participated with the funding of the CPG trade on Kickstarter.  And I'm really happy that all of you will be getting a copy of this for free, and I'm really happy that Tom did offer to do it.  No matter how much I have whined in the past, it came out pretty ok and it was a good lesson to have learned.  And I hope it will pay off later when you're all waiting for the next issue of the comic to come out.  ;]
Posted by JeremyBastian at 10:14 AM