over due C2E2 blog

I know I said I'd do this yesterday... but, I didn't.  Here is what happened the whole weekend of C2E2.  It's not exceptionally entertaining but here you go.

Emily and I started off at about 8:00 pm Thurs. and did really good time wise.  The traffic was a piece of cake and we had the audio book "Lord of Chaos" from Robert Jordan's Wheel of Time Saga with us so that helped.  Got to Tom's around 11:20 or so Chicago time.

Headed out to the convention the next day, sorta took a wrong veer and ended up at Target.  Which was okay because we needed some things.  Then magically ended up in just the right parking structure for the show and got to our table hassle free.  The show went really well, artist alley was really packed full of people and it was almost non stop.  Highlight of the show was when a friend brought us home smoked uncut bacon and cookies, including a batch of his peanut butter and bacon cookies.  He actually brought us three parcels of bacon but we're supposed to give the other two to the Petersens and Katie Cook and her husband Ryan.  After the show we had dinner with the Petersens and Mark Smylie of Artesia fame.  The line for the restaurant was too long for our too hungry selves so we decided to try the bar.  It was loud and cramped and busy and we didn't get menus until Julia decided she would bus our table for us and took all the empties up to the bar and gave them to a waitress.  After that it didn't take long to get some notice.  I will say I think there were like two waitresses for the entire area, so I empathized. Getting back to the car was a fiasco, couldn't get to the right floor of the hotel to get to the sky bridge because after 11 you need a room key to get the elevator to work right.  Then I tried putting my self pay parking ticket into the machine at the hotel instead of across the street at where my car was parked.  Okay I know that sounds kinda dumb but, all the machines look alike and all the buildings are connected and no where on the frigging thing does it say "this machine is for hotel parking only" even if it had said "not for cars in lot A" I would've felt less of an idiot.  That wasn't the end of the troubles of trying to get to the car but I don't want to talk about the rest, sooo...

Sat.  was pretty darn the best con day I've had to date.  Got to the convention a little late due to traffic but when I did get there, there was a bit of a line at my table and my con sketch list for the day filled almost immediately.  Which was pretty cool.  Lots of people throughout the day and after picking up books from Tom last night I didn't have to worry at all about running out.  After the show Emily and I had planned to just go back to Tom's and order a pizza and just relax but Tom was over at a friend's birthday party so we met him there and received an awesome home cooked meal.

Sun. was also really surprising for a Sun. usually I make about a third of what I can on a Fri. but it was about the same as Sat.  I had a nice talk with one of my favorite artists, which made me feel really cool.  Afterward we took a stroll and got some sushi with Gordon and Jennifer of Transylvania TV and Dave and Julia Petersen at a restaurant called Triad, just a few blocks from the convention center.  It was a delicious way to end the show.  We loaded the car up with CPG trades and said farewell to Tom and headed home.

That's about it, hope I didn't bore you too much, heh.  Among the things I had at the show I did have the finished Kickstarter print original there and a couple of the Pook the Tarantula plushies.  I successfully handed over the Kickstarter piece to Tom and he should have been able to get it scanned by now.  I will be able to post some art from it soon.  Here are a couple of the con sketches I managed to remember to take photos of. 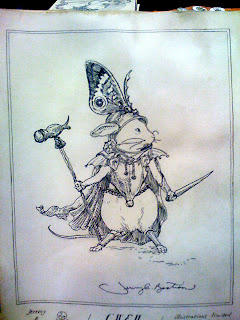 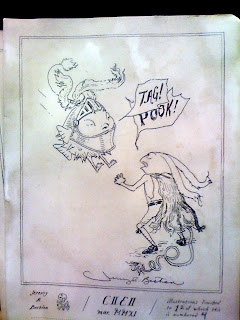 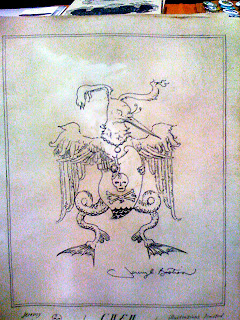 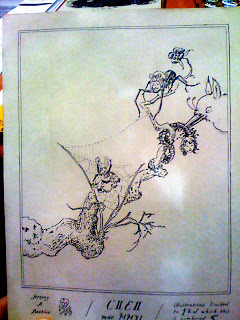 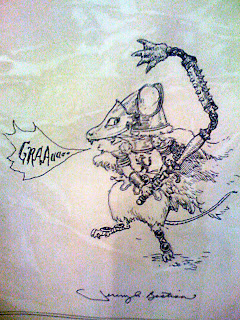 The next con I'll be attending is the Comic Geek Speak Supershow in Reading Penn. April 30th and May 1st.  Hope to see you there.
Posted by JeremyBastian at 8:09 AM